David Seymour arrived in Anchorage in December of 1969 at the tender age of 19, just for a visit with his parents.

He had some drafting experience & schooling and began to check out the local talents in Anchorage. He started out at George Barth’s Real Estate office just as was looking for a  Designer/Draftsman. George looked at Dave and said tossing him a file “can you finish these plans by next Tuesday?’ Ever confident in his willingness to learn by fire he said “sure”, and so it began.

David worked for George for the summer, then for Mike Aho for 2 years before deciding to branch out on his own. In 1973, with a handful of eager builders and a growing reputation he started The Drawing Room which eventually became David Seymour AIBD and now with his son’s help has evolved into Seymour Design Group.

David spent time working as a framer which gave him a sense of how to save money and prevent waste from the builder’s perspective. He learned what was needed in design to streamline the process, reduce the waste of materials and save the client’s money. Having this hands-on experience gives him the ability and knowledge to say “Yes – it can be done” or sometimes “No – it can’t be done”.

David has designed over 3,000 homes in Anchorage alone from 1971 to 2009. His expertise and knowledge of construction has also benefited builders, families and organizations in Idaho, Washington, Oregon, New England, Colorado, Russia and Japan.

In 1980 David met and married his soul mate Patty Litzen. Their daughter Jillian was born in 1982 and son Zachary in 1986. At that time David’s business operated from his home which gave the kids an up-close and personal view of the world of building design.

Jillian turned her attention to real estate like her mother, and Zachary joined his dad in the office in high school and full time in 2005. With the advancements of technology in computer modeling, Zach began exercising his talent in making 3D homes look like the real thing. Clients get the unique opportunity to see how the project will really look before it’s built.

Favorite projects for David & Zachary are custom designed homes, home additions, tenant improvements and remodels. They enjoy the challenge and display the talent that is needed to make your project look like it was meant to be there.

As a member of AIBD (American Institute of Building Design) David has been able to network with other designers from across the nation, and other countries to keep a finger on the pulse of the world of home designing techniques and methods.

David has won awards including 1st place for working drawings, and 2nd Place in Custom Design. He also has a 3rd place for the Design & Drawings for the Alaska State Exhibit at EXPO 82 in Hokkaido Japan in 1982.

Seymour Design Group is committed to helping you save money & time making your dream home, addition or remodel realized. They’re access to the Municipality of Anchorage, engineers, architects and interior designers helps make the process as seamless and painless as possible.

When you are looking to design your dream home or fix up the one you have Seymour Design Group is who to call. You may find that you’ll even have some fun in the process!

Member of American Institute of Building Design since 1975

Member of the International Code Council

Member of the Better Business Bureau since 2007

Along with building design David has a special passion for the Japanese Martial Art of Kendo (Japanese Fencing). When he dons his armor and raises his sword he is a force to be reckoned with! He also enjoys Iaido (the art of drawing the sword) and has a long background in Karate and other martial arts. He has found that the focus of training and the single minded concentration of the needed precision is calming and allows him to be more efficient and creative in his designs. 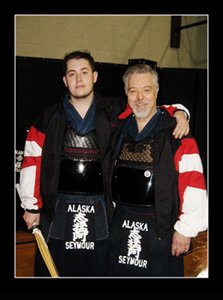 Seymour Design Group is a professional member of the American Institute of Building Design.